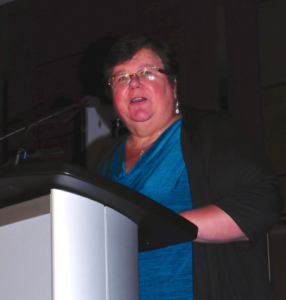 In many ways, Brenda Welsh was the quintessential snowmobiling volunteer, truly representative of the tens of thousands whose past and present contributions keep organized snowmobiling alive and well in Ontario. She is you and you are her. The OFSC salutes each and every one of you. We hope that through this tribute, Brenda inspires more snowmobilers to volunteer for their local club.

The Ontario Federation of Snowmobile Clubs (OFSC) and the entire Canadian snowmobiling community lost a major visionary and true friend on August 22, 2021 with the untimely passing of Brenda Welsh. A long-time club volunteer from Huntsville, Brenda made history on August 25, 2010 when she took office as the first female president of the Ontario Federation of Snowmobile Clubs. In 2012, Brenda was honoured by the Government of Canada as a recipient of a Queen Elizabeth II Diamond Jubilee Medal for two decades of volunteer work for organized snowmobiling in Canada. But her 34-year volunteer legacy continued far beyond these milestones.

“I have always wanted to work my way into the presidency,” she said in 2010. “It is a challenge to look after the interests of the whole province. There are a lot of variations and a lot of differences between trails in Kenora and trails in Orillia. There are 232 clubs and I want to make a difference and see some measurable results. That is always rewarding.”

Under her two-term presidency and as part of her progressive commitment to “recognize and manage changes to ensure our continued viability and growth”, the OFSC modernized its business practices under a new strategic vision called “Framework For Change” and innovated new systems and technologies still with us today, including the Interactive Trail Guide (ITG), Groomer Fleet Tracking, and online groomer operator training.

Her presidency followed a 10-year tenure serving as OFSC Secretary-Treasurer, and on the OFSC Executive. In these capacities, Brenda was also at the forefront of leading organized snowmobiling through a period of major changes, including: Bill 101, which made snowmobile trail permits a legal instrument of the Government of Ontario and changed the way the OFSC and its clubs do business; the debut of online permit sales; and the implementation of a new district development model including the quantified trail matrix, which spread permit revenues around the province more equitably.

She was also directly involved in bringing the OFSC successfully through the insurance crisis of the early 2000’s keeping the federation’s liability insurance affordable and available ever since, as well as initiating the most advanced risk management program in organized snowmobiling today.

At the same time as her OFSC service, Brenda volunteered as vice president and also treasurer for the Canadian Council of Snowmobile Organizations (CCSO), a position she held up to her recent passing. She also served as Vice President of the National Trails Coalition, which invested over $40M from the federal government into snowmobile trails across Canada.

Starting as a club volunteer in 1987, Brenda worked her way up through the presidency of both the Huntsville-based Du-Ya-Wanna Snowmobile Club and the Muskoka Snowmobile Region before moving on to the OFSC.  Brenda brought her love for snowmobiling to every position as well as a wealth of business acumen. She had a bachelor of applied science from the University of Guelph, a masters of business administration from York University, and a certified general accountant designation.

Her passion for volunteering was a shining example for many others who followed in her footsteps, such as Joel Brosseau, OFSC Governor of District 12 and President of the Sudbury Trail Plan, who paid his mentor this tribute: “Brenda showed me that there was a sense of community and belonging to be found within a snowmobile club. Eventually she encouraged me to pursue leadership opportunities and further develop my skills. She would listen with compassion and offer innovative solutions to whatever challenges I faced. She taught me that organized snowmobiling at its core was really just a collection of people with a common goal, and that each of those people played a key role in its success. Her skill, guidance and friendship have helped to shape so many of the people and organizations she touched.”

Brenda was born and raised in Sudbury, where snowmobiling became part of her life from an early age when she worked at a family member’s dealership and rode demos at every opportunity. She is survived by her children, Taylor, Jaclyn and Shayne, and her husband Tom who together owned and operated a very successful family business, Huntsville Marine.

Brenda, may you rest in peace, secure in the knowledge that you certainly made a major difference with everything you accomplished. Your many snowmobiling friends and colleagues salute you and join together in wishing you happy trails forever!